Everyone is talking about Tom Hardy these days. Who could blame them.  Here is an article on his workout that I got from: http://www.fitmole.org/tom-hardy-workout/
For those men who have a man crush on Tom Hardy, and want to be like him, try this workout and read this. 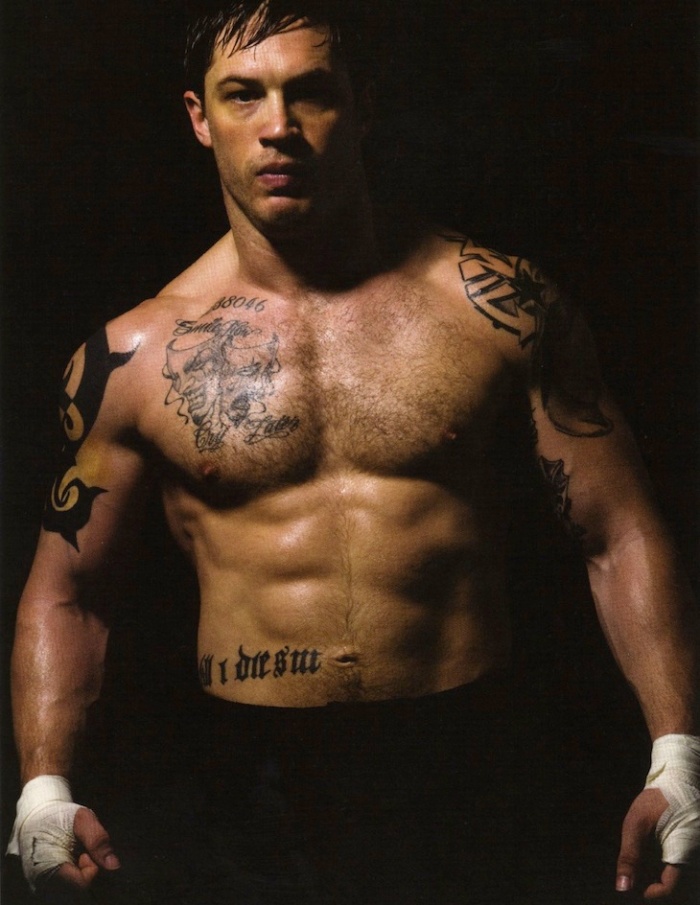 Tom Hardy has just recently made a name for himself in Hollywood, with roles in Inception, Warrior, and the upcoming The Dark Knight Rises. I have a feeling he’s going to be the next big Hollywood star.

Though it was just released this past weekend, Warrior is already garnering a ton of attention not only because it’s an awesome movie, but also because of Tom Hardy’s ripped MMA body. Hardy reportedbly put on 28 pounds of hard muscle for his role and it definitely shows.

But how exactly did Tom Hardy transform his body into a MMA fighter in Warrior?

Read on to learn about the Tom Hardy workout.

Tom Hardy’s trainer Patrick Monroe, aka Pnut (yeah I don’t get it either) put Hardy through a very intense training routine to get ripped for Warrior. Not only was the routine intense, it was also a little um…. weird.

According to Pnut, signaling is a special technique used to send a constant steam of stimulation to your muscles.  So for example, instead of doing 50 pull ups in one sitting, you would do 10 pull ups in 5 different sittings.

By doing it this way, you’re doing the same amount of work, but spreading it out over a longer period of time.

Pnut would have Tom workout 3 times per day for 20 minute intervals. He would workout in the morning, lunch, and before bed.

Pnut’s argument is that if you spread the work load over the course of the day, then you will be consistently sending your body signals to grow, hence the term “signaling.”

So what do I think about “signaling?” Well… it’s interesting, that’s for sure. I have personally never structured my workouts this fashion, and don’t plan on ever doing so. Even though you are only working out for a total of 1 hour per day, it’s still a hassle to do 3 seperate 20 minute workouts. I’m not saying it doesn’t work, because I’m sure it does. This type of workout just doesn’t fit my lifestyle.

If “signaling” sounds good to you, then check out the sample routine below

Perform the workout below 3 times per day with at least 3 hours in between each session.

Do this every other day.

For each of the following exercises – do 3 sets and rest 30 seconds in between each set.

Here is the rep scheme:

While this workout is super simple in concept, please remember that you’re doing it 3 freaking times per day. Also remember that Tom Hardy did a bunch of additional MMA training as well.